The village of Štítnik (Hungarian: Csetnek) is located in the southeastern part of Slovakia, about 12 km west of Rožňava. Štítnik's main tourist attractions are the ruins of the medieval castle and the Gothic style Lutheran church.

The ruins of Štítnik Castle can be found in the town-centre. The construction of the castle was begun by the Ákos Clan, probably in the first-third of the 15th century. During the years of the Turkish threat it served as a border-fortress. At the end of the 16th century it was strengthened by the addition of bastions and watch-towers. In the 19th century, the Sárkány family, who were the owners of the castle at the time, converted one of the wings of the castle – which was in a better condition – into a country-mansion. 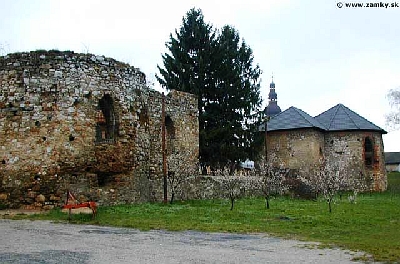 Today a school is being conducted in this building.

The Gothic style Lutheran church dates from the 14th-15th centuries. The frescoes inside the church were painted in the 14th-16th centuries by Italian artists of the Renaissance Period. The altar-piece was painted by Hans Aachens. The Gothic christening-font was prepared in 1454. Its organ, erected in 1492, is the oldest in the country.

The wealth of the town in earlier times can be deduced from the still existing palatial homes in the town-centre. The Maritinszky House, in the town’s main square, was built in the last-third of the 18th century. The two-storey building, with its stepped façade and tympanum, and elaborate plaster-moulding decorations, is the most prominent building in the square.